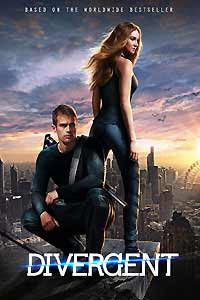 My friend Beth loved the “Divergent” trilogy of Young Adult dystopian-future science-fiction novels with a 15-year-old heroine. They are being made into movies and the second installment, “Insurgent,” is due out on March 20, so I read the first book, “Divergent” and watched the movie on HBO.

I am fascinated how our mythology teaches young adults how to act in the face of danger, and how to be courageous and to take charge of their own lives and safety. Beatrice grows up in the Abnegation faction, which is like a clan, where selflessness is paramount.

At 15, everyone in her society chooses the clan where they will spend the rest of their lives. Beatrice truncates her name to Tris and leaps into the Dauntless clan, where bravery is prized. Tris must fight for her own life and the lives of those she loves.

The message of Divergent is similar to the indoctrination I received:

“I have a theory that selflessness and bravery aren’t all that different.”
— Tris in Divergent by Veronica Roth

Tris starts to realize that the differences between the clan of her birth and the clan of her choice may vanishingly small, and that treachery may lie beneath the efforts of others to pit the two clans against each other. Now that I have lived so many years trying to be a hero and a savior, I am starting to realize that this loyalty/bravery/sacrifice indoctrination may serve others who do not have my best interests at heart. It may actually serve those in power, at my expense. What would REALLY benefit women and children is working together. But in this book, ambitious and resourceful youngsters are pitted against other, with the top performers being destroyed by the second best.

Maybe we could evolve into something that works better. Let’s find out What Self-Loving People Do Differently. Could this strategy lead to young people working together instead of ruthlessly competing against each other?

I don’t think I will read the second book, even though my friend Beth said it was her favorite of the three. I understand the philosophy. I look forward to watching the Insurgent movie when it comes out.